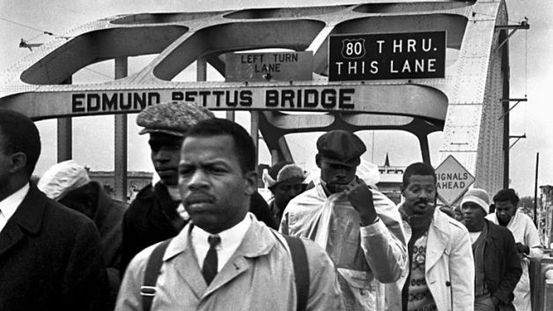 ﻿The Selma-to-Montgomery March for voting rights ended three weeks--and three events--that represented the political and emotional peak of the modern civil rights movement.       On "Bloody Sunday," March 7, 1965, some 600 civil rights marchers headed east out of Selma on U.S. Route 80.
They got only as far as the Edmund Pettus Bridge six blocks away, where state and local lawmen attacked them with billy clubs and tear gas and drove them back into Selma. Two days later on March 9, Martin Luther King, Jr., led a "symbolic" march to the bridge.                                            -Courtesy National Park Service

The weekend of March 6-8, 2015, I was honored to travel with the Hillsborough County (Tampa) Branch of the NAACP to Selma, Alabama to report on the 50 Anniversary of Bloody Sunday. Two buses carrying a total of 89 people made their way to Selma for a weekend of events... including a visit by President Barack Obama.
The weekend culminated with a symbolic walk across the Edmund Pettus Bridge. Below are my reports for WFLA-News Channel 8, beginning with live coverage aboard the bus headed to the Selma and live coverage on the bus returning from Selma.
It was an amazing experience to retrace the steps of history and appreciate what those before us gave, to give us opportunities today.
click here watch time lapse video of crowd gathering on edmund pettus bridge